I have been experimenting a lot with microscopy and taxonomy of protists lately, maybe even calling it my hobby. It's been almost 2 years I got my hands on a 10 pound pocket microscope and I have learned a lot about techniques to take pictures, what looks cool, collected insights, some of the best reactions when people realize, sometimes for the first time, the world is a freaking beautiful and complex place and once you have seen it, it's hard to unsee.

After I found out that a pocket microscope with 120x magnification wouldn't cost me more than 20 pounds I got my hands on the cheapest option of all, I was really in doubt if I would be able to see any thing. It was actually great and looking at wood, skin, fabric, insects, the red, green and blue leds that make a pixel and printed paper was absolutely mindblowing. Some things would come with this really trippy crystal light beams. I also managed with a heroic effort to make a video of a cell moving on some dirt! This was actually what hooked me on. 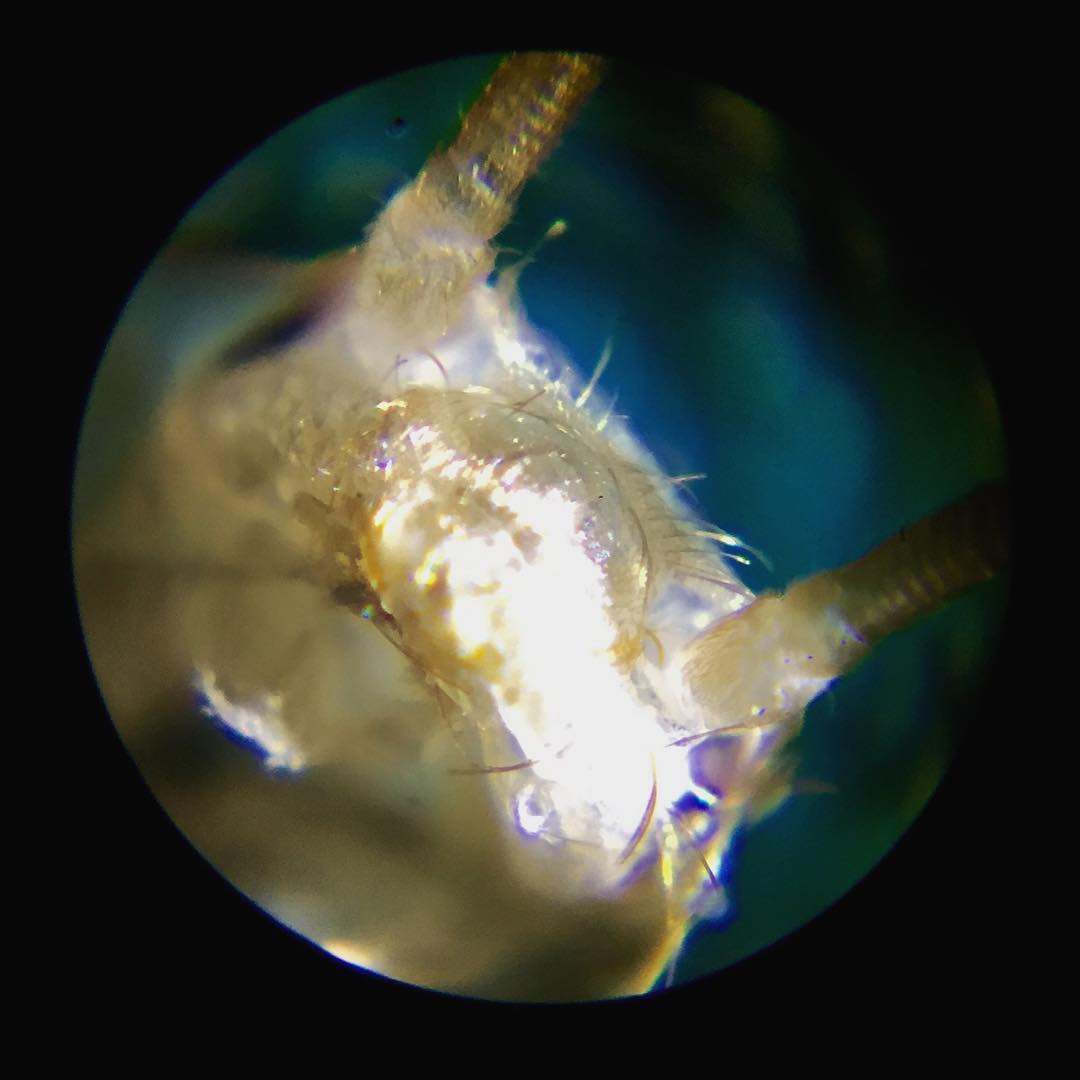 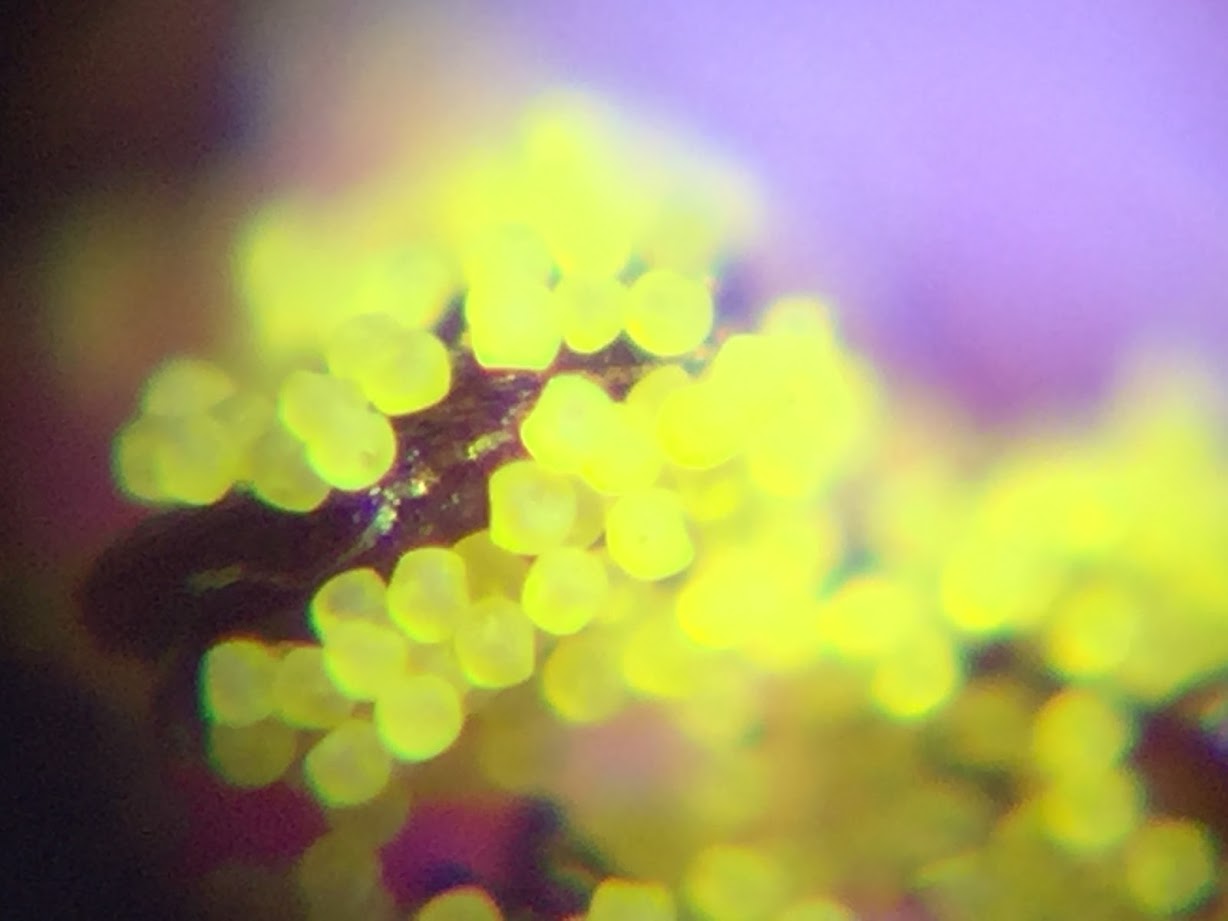 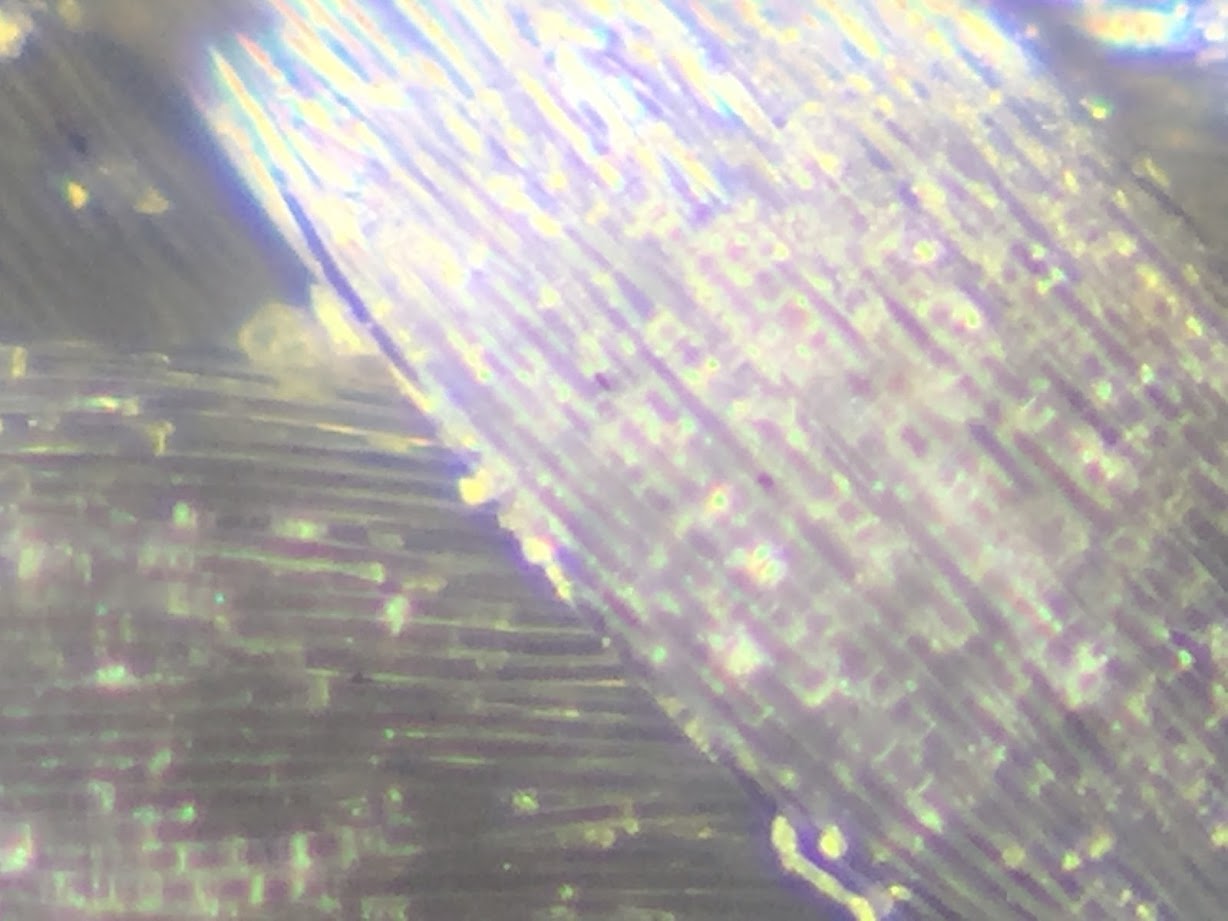 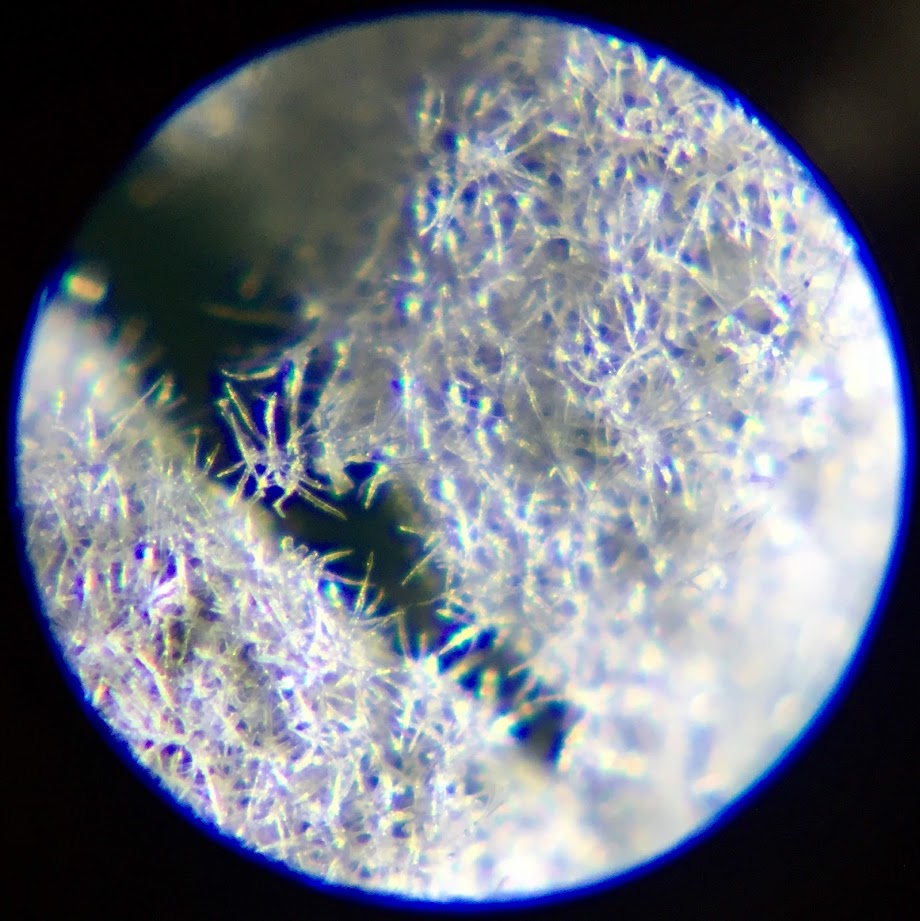 Video of me playing with focus

It took me a little to understand that the trippy dots were actually light reflection, because of the LED that was way too strong. The micrscope had this LED you turn on, without it it's really hard to see anything. Later on I found out that looking through leaves against the sun was far the best way to look at things, much better than looking with the LED on. It was when I realised light was really what was on the way to see more stuff.

Blocking the light to see textures didn't really made much difference, except when you shine different colors on stuff, then it's really cool to filter out colors from the image.

But I was into the living stuff. The first time I saw a moving thingy on a rain water I freaked out. In a good sense. That meant a lot for me in many ways that touched my heart.

I collected a sample from a puddle on the garden of my building with a spoon, even with some dirt on it. Then I cut some pieces of transparent hard plastic I found on the recycling bin and laid a little bit of dirt on it. I tried to cover it with another piece of plastic to look professional like they do on labs but it was a horrible idea, really messy to move around with the microscope on top of a sandwich of plastic and water. 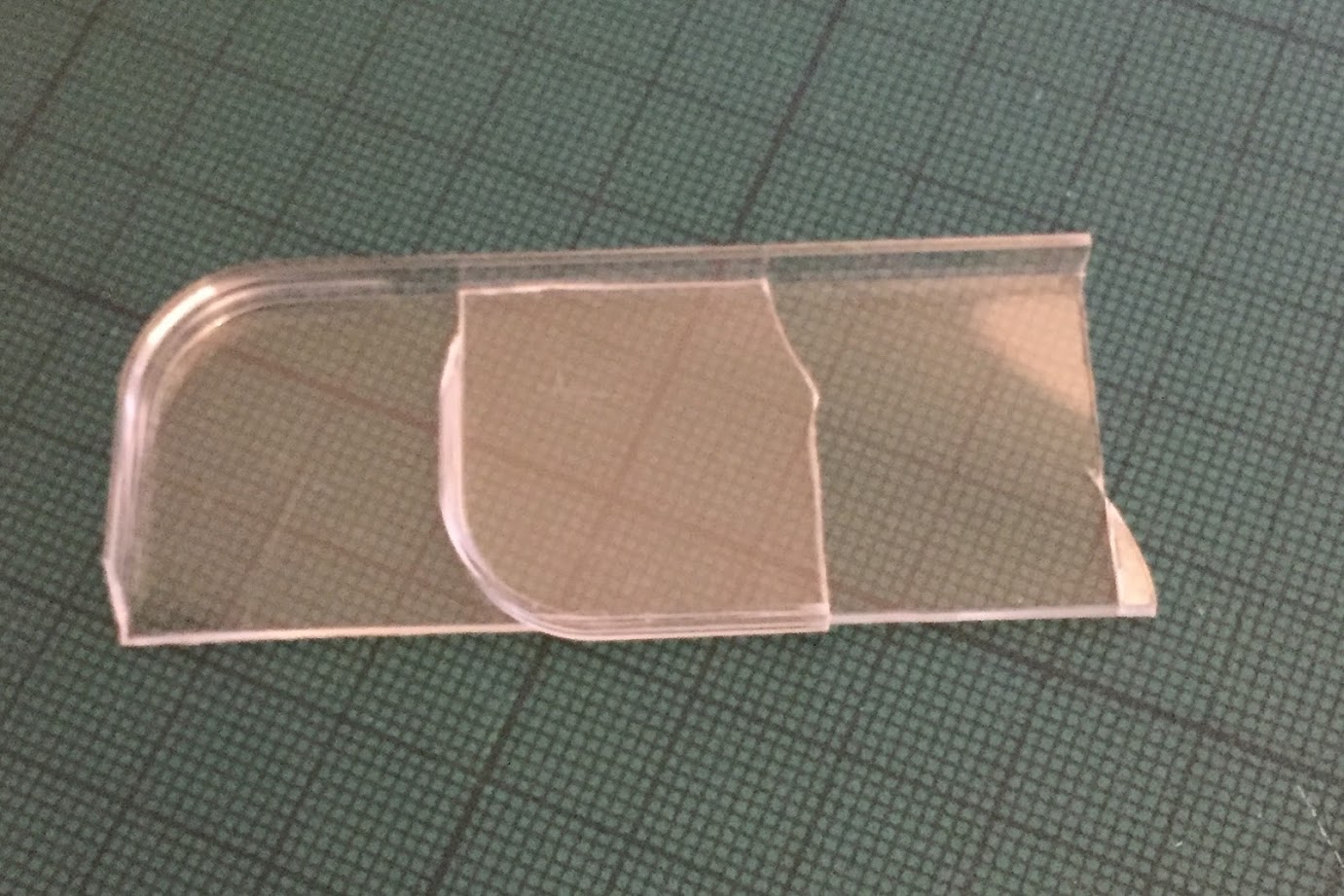 The next time I did it I found nothing and for many other tries I only saw dead matter, really cool looking dirt and other interesting stuff. I even made my first experiments with leaving leaves on water to collect samples from. I couldn't see much and they stinked really bad. I guess that was a good sign but it was enough to move on different ways to collect sample. 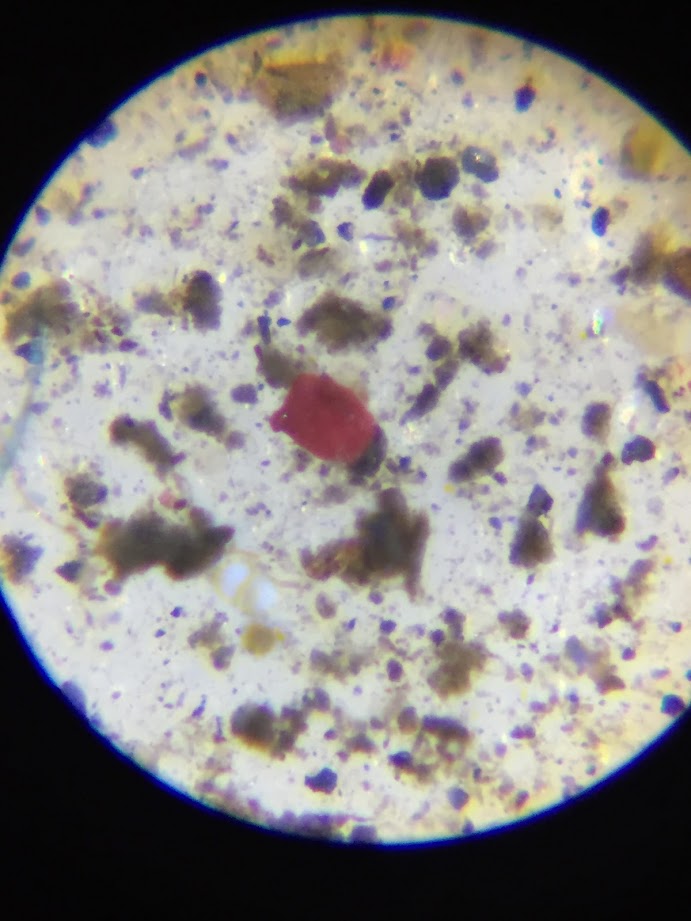 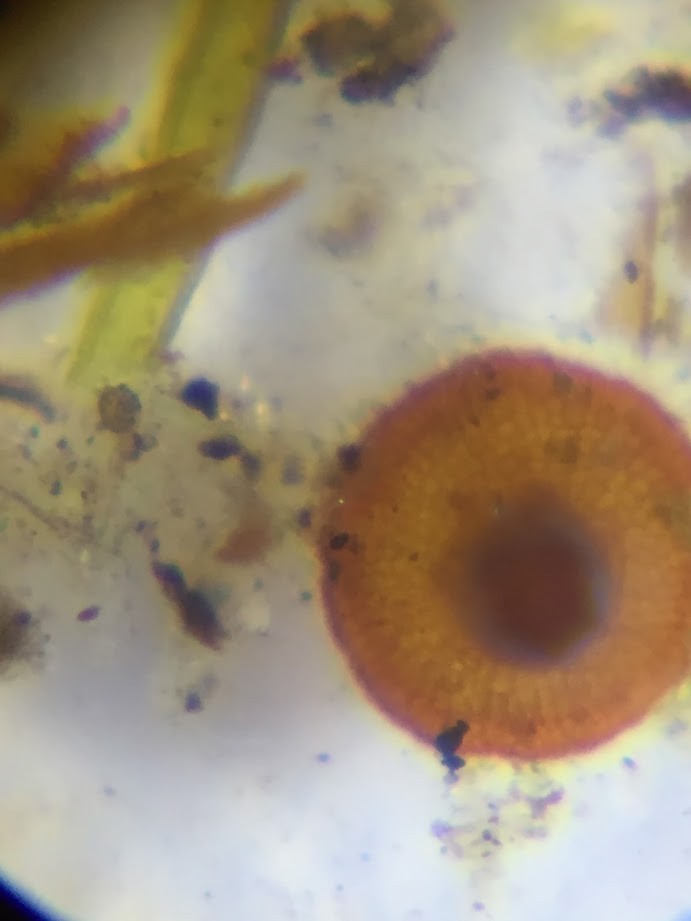 I took rainwater that accumulated on a swimming pool, that was long due to be cleaned and stored, with a dead spider on it! Oh, I was really excited on what I would see. It turned out all I needed was a masking tape on top of the LED and looking at a droplet of water on top of a dark surface. Sweet mother nature, so much stuff.

I made a contraption out of some mini pallets (I knew they would be useful one day), paper clips and rubber band to perfectly align my cellphone camera at the right distance both because I wanted to take picture and because my back really hurt of spending one hour on a ungrateful position to see some algaes. Oh yeah, I started learning some names thanks to a channel on Youtube called Journey to Microcosmos and many other great material on the interwebz.

Moving around with that contraption sucks so looking at quickly moving creatures was just impossible. On higher magnification you do need an extra boost on the light so the tape cover is actually ok.

Videos of diverse creatures moving around:

People really have mixed feelings about being able to see this, some get really happy and emotional, some get into a psychonaut journey with the microscope and other think everything is disgusting. Some people I think never get to learn how to use the focus and are ashamed to admit so they give it back without making the characteristic sound someone makes when they see whatever on microscope: UUUUUHHHH!!!!! It doesn't matter if you give it back and don't really get excited or if you totally dig it, that sound is a reliabe threshold.

I owed many pocket microscopes because I can't really help myself and everytime I see someone getting as excited as I am about it, I gift it. It has always paid with someone to talk about microcosmos and some friends started to walk with their microscopes wherever they go.

I think I obviously spent more time than anyone else that I know looking at tiny pieces of whatever but after seen a bunch of parameciums and rotifers and even gaining some skill navigating with the whole contraption without banging and shaking everything out of place (sometimes this is really painful).

The best solution was to actually attach the microscope to the pallets a little bit above the bottom so to move without destroying the blob of water. Because it's a blob you have to change the focus all the time because guess what, things move in a 3D space like they are swimming, because they are. Changing focus on this parafernalia is very annoying and the phone would always get an angle that created a super annoying optical distortion... I was getting picky!

I started to think it would be really nice to make a contraption to move the water blob and get at least some nice glass slides, right? I looked at the prices and fuck it I found a relatively cheap desk microscope with an HD camera on it and gave myself a gift at least.

Best thing I have done, I am very excited to the point I'm actually learning about protistology thanks to an actual PhD biologist friend and of course the interwebz! Here is the first video I made after an afternoon looking at exactly 01 water drop.